Warning: chmod() has been disabled for security reasons in C:\Domains\125585\littlegemva.com\wwwroot\wp-admin\includes\class-wp-filesystem-direct.php on line 173
 Inspirational Women in History… so far - Little Gem VBS
info@littlegemva.com

Inspirational Women in History… so far 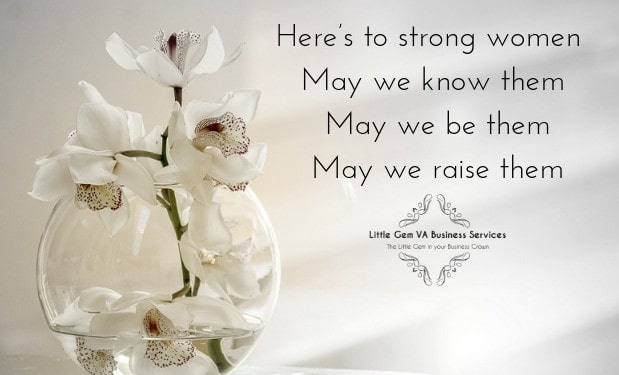 8th March is International Women’s Day, a time for us to celebrate women from all walks of life.

History has given us such a very long list of amazing women who have not only succeeded in their fields but in some cases have changed laws, invented cures or created new technology whilst others have raised awareness of issues that women face on a daily basis (think domestic abuse, breast cancer to name but two).

From science to stage, we have many powerful, determined, strong women to thank for the impact they have made to our lives.

I wanted to share with you some of the achievements of some of these amazing women and what they have taught us.

Sadly, there are just too many to mention but this is just a handful of those who have ensured we have the voice, strength and power to reach our goals and make our dreams a reality.

* Helen Keller: Having lost her sight and hearing at a young age she defied expectations to achieve a bachelor’s degree.

Helen has inspired generations as an activist for disability rights. “Alone we can do so little; together we can do so much.”

* Emmeline Pankhurst: demanding equality for women and their right to vote.

Emmeline taught us to never underestimate the power of a woman.

Elizabeth taught us how to succeed in a male-dominated industry.

* Shirley Temple: apart from being a successful child actor, in later life, she became an ambassador for raising awareness of breast cancer. Many lives have been saved as a result of her tireless efforts.

Shirley taught us to speak up about issues that affect us and to know we are not alone.

* Hedy Lamarr: although a successful actress of her time, few know that she worked on a radio guidance system for the troops in WWII and this contributed to the development of Bluetooth and WiFi technology.

Hedy taught us we can be beautiful and brainy and to use our many talents to the full.

* Irena Sendler: a Polish nurse who smuggled thousands of Jewish children out of Warsaw during the early 1940s.

Irena taught us, no matter what, we must always do the right thing and to never be afraid.

* Edith Summerskill: MP who campaigned for the equal rights of all women.

Edith made us question the status quo of gender roles, her views on how women have managed to achieve despite the limitations put upon them by society.

* Rosalind Franklin: an overlooked member of the team who discovered the double-helix structure of DNA.

Rosalind taught us that we must celebrate our achievements, even when others don’t, we must always believe in ourselves and our ability to succeed.

* Valentina Tereshkova: coming from humble origins she went on to be the first woman to go into space.

Valentina taught us to keep reaching for our goals, no matter how out of reach they may seem.

* Katharine Graham: was the first female CEO for a Fortune 500 company and editor of the Washington Post.

“To love what you do and feel that it matters how could anything be more fun?”

Wendy taught us that no industry is inaccessible to women.

*Princess Diana: her inspiring work with AIDs sufferers and anti-landmine campaigns to Diana being known as “The People’s Princess.”

Diana was an inspiration to so many and she taught us that everyone in society deserves to have a voice.

* Susan Solomon: along with her team she was the first to attribute the hole in the ozone layer to CFCs, such as those used in aerosols and refrigerants.

Susan taught us that one woman could change the future of the entire planet.

* Sheryl Sandberg: although known for being the COO of Facebook, she is also the founder of a non-profit organisation offering women the ongoing support and inspiration to help them achieve their goals.

Sheryl has taught us to be fearless, “What would you do if you weren’t afraid?”

* The Silence Breakers: the women who started a revolution of refusal and said #TimesUp to sexism and harassment in the workplace.


Warning: chmod() has been disabled for security reasons in C:\Domains\125585\littlegemva.com\wwwroot\wp-admin\includes\class-wp-filesystem-direct.php on line 173